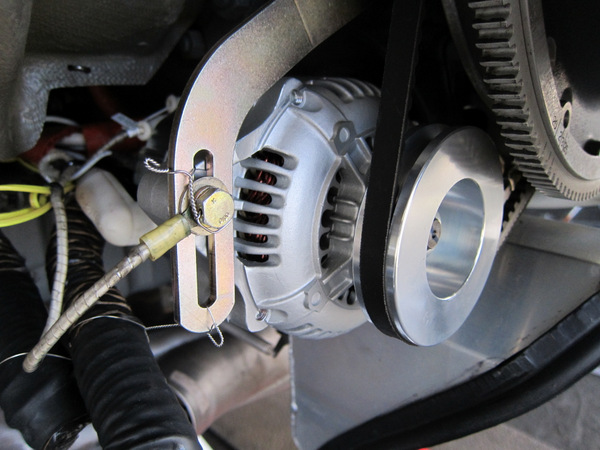 I always say that the greater your understanding of your aircraft’s systems, the better you will be at problem solving when things start to act up. Alternator failures do not occur often, but when they do, it affects the electrical systems of the aircraft, and your own decision making skills.

What does the alternator do?

In a light aircraft, the function of the alternator is to supply electrical power to electrically powered equipment in the aircraft such as radios, lights and certain instruments. It is not directly involved in starting the aircraft, as this is the job of the battery and magnetos, but it is necessary for recharging the battery.

How will I know if the alternator has failed?

The first indication will present itself on the ammeter, which will show a discharge, or even a zero reading. If you haven’t noticed the ammeter discharging, then the first sign that may alert you, could be your electrical equipment acting up, such as your radio working intermittently. If your aircraft is fitted with a volt meter, you will also see a drop in reading from the norm of about 13.5 – 13.8 down to 12 volts.

Can the aircraft fly with an alternator failure?

Yes, however, the electrical equipment will be affected, which means that you could lose your radios, navigational equipment and some instruments. These things can run for a limited time on battery power, but how long the battery will last, depends on the age of the battery – it could last 15 minutes or 1 hour, you just do not know for sure.

What should I do if my alternator fails?

An alternator failure is not a Mayday situation, but trouble-shooting and decision making skills are required. The first step is to take out the POH for the aircraft, and locate the procedure for an alternator failure. If you are in a controlled airspace, then it is a good idea to inform ATC of the failure, so that if your radio fails completely, they are aware of your situation. While it is a must to check the procedure for your specific aircraft, the first likely step is to find the ALT switch on your cockpit dashboard, turn it off, check the circuit breaker, and then turn the switch on again. If the ammeter or volt meter starts to climb again, then the problem could be resolved, but keep an eye on it. If this has no effect at all, then you must immediately consider what equipment you will lose when you lose the remaining battery power. This can become an urgent situation, so for starters, consider turning off all non-essential electrical equipment to reduce the load. Then consider the best place to land. Keeping in mind that you don’t know exactly how much time you have, consider an airfield within reasonably close proximity, but also one where there is a maintenance facility to get your macjine fixed.