Refuelling from Plastic Cans – Is it safe? 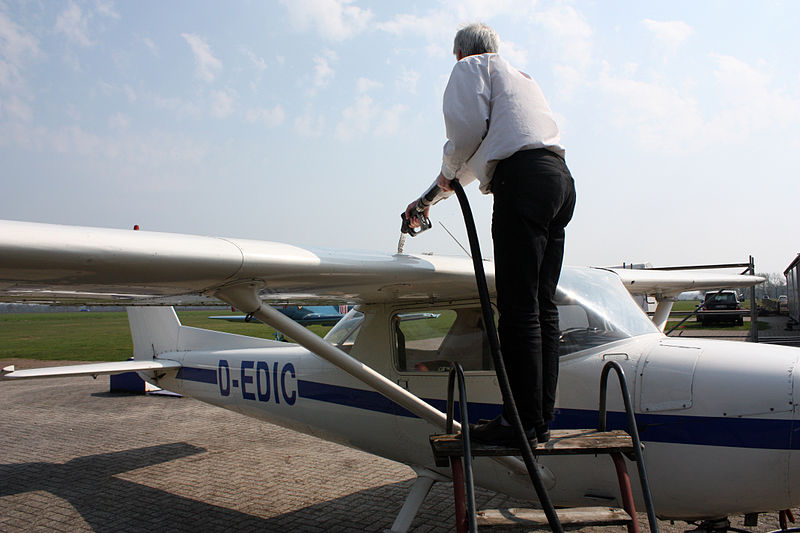 If you fly an aircraft that uses regular unleaded Mogas, you may consider yourself fortunate, in the sense that your fuel expenditure is probably handsomely less than the girls that ingest Avgas by the gallon. However, this usually requires the extra effort of loading up some jerry cans, and heading off to the nearest petrol station, before returning to refuel the aircraft from the said cans. But have you ever given a thought as to how safe your plastic jerry cans are, and how safe your general refuelling practices are?

Fuel of any kind is highly flammable, and whenever transferring from a container, be it a portable plastic can, or a bowser, there are risks involved. There are the obvious factors, such as smoking near fuel or refuelling inside a confined hangar, where there is usually a nest of other flammables, and there is little place to escape from flames, should something ignite. The biggest threat, however, is a lack of awareness of external sources of ignition, such as static build up, and hot engine components.

What is static electricity?

Static electricity is the electric charge generated when there is friction between two things made of different materials or substances, for example combing your hair or touching synthetic clothing. When it comes to fuel, a similar scenario occurs when fuel moves and touches a different material when being transported or poured through pipes and spouts. Even when fuel is transported in a non-conductive container such as a red plastic can, it is the material that the outside of the can comes into contact with that causes the static. For example, you fill up the plastic cans at the fuel station then load them up into the boot of your car, which is undoubtedly carpeted, and to top things off you are probably wearing a tech fabric breathable T-shirt so that you don’t get too sweaty while flying. The fuel is then jostled about  in the container while you drive back to the airfield. Fuel presents a static electricity hazard depending on how it generates static electricity, how it conducts electricity, as well as the flash point i.e. the point where it ignites.

What could cause fuel to ignite?

When the fuel is poured through the pipe, it tends to hold a charge because it cannot conduct electricity sufficiently to discharge even when in contact with a conducting material, like a metal pipe or container, that is grounded (usually when refuelling from a bowser or metal can a grounding wire is connected to the aircraft exhaust). When enough of a charge is built up, a spark may result. If the vapour concentration of the liquid in air is in the “flammable range” and the spark has enough energy, a fire or explosion can result (1). However, even when a non-conductive container is used, such as your plastic can, these still decrease the rate at which the charge in the solvent dissipates.

Daily variations in general atmospheric conditions and temperature are also something to consider – high temperatures will cause the fuel to vaporise, and therefore there is a greater amount of fuel vapours surrounding the container. At high altitudes, where the air pressure is lower, the flash point is reached sooner as the optimal vapour/air ratio is lower. So, if you are at high altitude on a hot day, you need to anticipate this, and take extra precautions.

How do you improve safety when refuelling?

To prevent the build up of static electricity and prevent sparks from causing a fire, it is important to bond metal dispensing and receiving containers together before pouring. Bonding is done by making an electrical connection from one metal container to the other. This ensures that there will be no difference in electrical potential between the two containers and, therefore, no sparks will be formed (2). Most grounding is achieved by connecting a bonding wire between the two metal surfaces, the fuel can / bowser and the aircraft.

If you are using a non-conductive container such as a specially designed plastic container, you still need to exercise caution as static charge can build up with fuel sloshing in the can. You should try to limit the movement that the fuel experiences, and especially when pouring from these cans, try to pour smoothly, with as little spillage as possible. It is also highly recommended that you use a grounding wire, or use your car jumper cables to connect the can and the aircraft.

Apart from these things, always fuel the aircraft outside of the hangar, and consider what you are wearing. Synthetic fabrics are really not conducive to aviation safety – consider wearing gloves, and avoid any rubbing of clothing when refuelling. Finally, always consider the wind direction when refuelling (you want to be standing downwind), and have a fire extinguisher by your side.