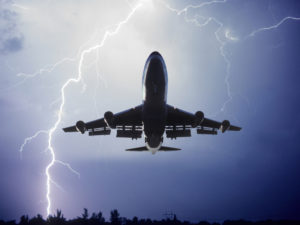 There you are, flying along, looking at the scenery, when suddenly, it feels like your aircraft has hit an invisible roller-coaster, throwing you upwards, and downwards, to such a degree that you want to grab on to your seat. Turbulence can not only result in screaming, vomiting passengers, but also sweat beads on pilots’ brows. Turbulence is never pleasant, but understanding where you might encounter these conditions and what to do if you do, will certainly add to your confidence bank.

Turbulence is essentially a brief disturbance of the airflow, with the severity of the reaction on your aircraft being governed by the velocity of the air mass which is causing you to feel rather thrown about. There are two main causes of turbulence, namely thermal and mechanical. Thermal changes, resulting from different land or water surfaces being heated up during the day, and giving off heat unequally will result in the air above being quite unstable, especially in Summer where the effect of heating is significant.

Mechanical turbulence is the result of obstacles in the path of moving air, which forces the air upwards or downwards in order for it to continue on it’s path. A significant example of this are mountains – the bigger the mountains and the higher the wind speed, the more likely you can expect a bashing. With mountains waves, the most dangerous place to be is flying over the top, and then the leeward side if the wind is behind you, as this is where the air is moving downwards towards the ground. Similarly, buildings can also cause considerable upset – if your airfield has a suburb full of houses near the landing threshold, then you can expect things to get a bit bouncy as you descend towards the threshold, due to the wind being channeled around these buildings, especially if the wind speed is high.

Similarly, wind shear can occur where wind is inhibited by obstacles, and slowed down, and then once past the obstacles, the speed once again increase as it is ‘freed’ from obstruction. These rapid changes are particularly hazardous, especially when landing, as this can lead to aircraft being blown off the centre-line, or worse, the runway itself. Airfields that regularly suffer from this phenomenon will often publish warnings of such possibilities.

At larger airports, where there are a number of different types and sizes of aircraft taking off and landing, then wake turbulence also presents itself. If you have not read the article dedicated to the effects of wake turbulence the read it here. As an example, taking off after a large aircraft without adhering to the required time separation will most likely result in unstable conditions with wings unpredictably trying to touch the ground. If you are under ATC control and you feel that the time separation that you  have been given is incorrect or insufficient, rather speak up!

When traveling in a large passenger aircraft, it is not uncommon to experience significant turbulence, especially at certain times of the year, and in areas where large air masses converge, such as at the Equator. The challenge of Clear Air Turbulence (CAT) is it cannot be predicted using cloud as an indicator, like you would predict turbulence associated with thunderstorms, and it will not show up on weather radar. CAT is usually not a factor for general aviation, as it occurs high up, near the Tropopause, where jet streams of fast moving air occur. There are significant temperature gradients which occur at this point, and remember what I said about the faster the speed of the moving air mass? Well there you have the reason why the inflight catering service is suddenly halted during your flight!

What is interesting, is how airline pilots cope with moderate to severe turbulence in these zones, and how we can take lessons from these procedures. Firstly, every aircraft has a turbulent air penetration speed – yes, even your C172! This will likely be somewhere between your stall speed (both high and low speed), and the beginning of the yellow arc, but as each aircraft is different, check in your POH and remember!. DO also take into account take into account the weight of your aircraft and OAT, as encountering turbulence with a heavy aircraft, for example, will cause further stress on the air frame, and may require a lower speed.

So what should you do?

If you need to report areas of turbulence, here is a guide as to how to explain the intensity:

Most importantly, if you are flying with passengers, explain to them what turbulence is, especially if you know things are going to get a bit bumpy, and the necessary safety precautions. There is little to fear if you are prepared!