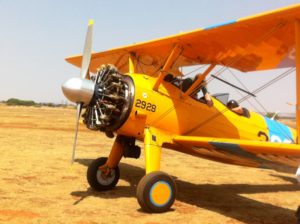 When it comes to radial engine aircraft this has got to be one of the nicest. Due to it’s American origins, it is hardly surprising that almost everything on this aircraft are of a grand scale. There is nothing more impressive than a huge, un-cowled radial engine, and an equally massive prop and nose cone. Bi-wing is just beautiful, but adding everything big and bold to it, simply makes it stand out.

Unfortunately, I didn’t get to speak to the owner, as he was simply having to much fun, totally excusable, but if you fly, or have flown a Stearman, please tell us your experience in the comments below!

This aircraft was a massive success during the 1930’s and 1940’s, as war loomed and demand was high, with over 10 000 being built. Similar to the Tiger Moth in purpose, it was primarily used as a trainer. It has incredibly rugged construction (just have a look at that sturdy undercarriage!), which means it could handle hard landings at the hands of inexperienced new recruit pilots.

On the ground, like most tail-draggers, the Stearman is a big challenge to taxi, as visibility is almost impossible, so you will see the pilot weaving like a drunkard down the taxiway. She is a heavy plane, and requires a firm hand on the controls to move her, but once in action, aerobatic manoeuvres are what she begs for. The open cockpit provides for an incredible flying experience, but is probably not the quietest one you’ll ever have, but that is not the point.

This is not an aircraft for travelling distances, it will use up loads of oil (a quart every 6 hours!) and fuel at 14gph, so not the most economical, but when it comes to fun factor, it would make my day to sit inside the cockpit when that bit engine coughs and splutters into life!