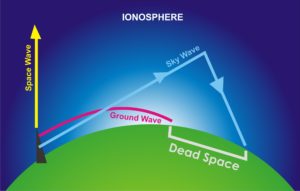 An airliner is communicating with a station using HF radio. Gradually, communication quality declines until it has all but faded out. Why does this happen, and what actions are taken to restore communications?

Firstly, high frequency is used for communicating over long distances, from a ground station to an aircraft, or from an aircraft to a ground station, over the horizon, but not air to air. In the aviation industry, it is a requirement for trans-oceanic flights to be HF equipped due to the distances covered.

The HF or Decameter Band (10m to 100m wavelength), is defined as ranging from 3MHz to 30MHz. However, HF transmissions are between 2,850MHz – 24,890 MHz, taking note that 2,850MHz is less than 3Mhz, because this is the lowest single side band transmitted. In other words, HF communication uses a single-side band with a suppressed carrier.

The Ionosphere varies with the solar cycles, seasons, day and night, and therefore a single frequency will not provide optimal communications:
The solar cycle – at solar minimum and maximum, the lower and higher HF band frequencies respectively can only be used. Large solar flares occur more often at solar maximum, causing the D layer to be ionised, resulting in the absorption of the lower frequencies in the daytime – called a short wave fade-out. This can last several minutes to hours. If it is suspected that this is the cause of fading communications, then try using a higher frequency.

The Equinoxes (March and September) – frequencies can be higher.

Of course, there are practical limits to the high and low frequencies in that:
Too high a frequency will pass straight through the Ionosphere and not be refracted, and hence not reflected back down to earth.
Too low a frequency, much of the energy will be absorbed by the D layer and it can also be screened by the E layer.

Again, it goes to show, the more solar radiation present, the higher density of free electrons, the higher the refractive index and thus the higher frequency that can be used.