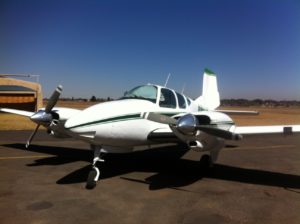 I have taken to calling it the ‘Bitchcraft’ Travel Air, because as I am learning to fly her, it all seems rather challenging! Admittedly, I think this is a “mans” plane, simply because, if you are a lightweight like me, single-engine simulations require ALOT of single leg input on the rudder – be warned!

So what makes the Travel Air so worthy of writing about, even though I am sometimes convinced she was designed to hate her handler? Well, this is apparently the last remaining Beechcraft Travel Air in South Africa, so it is indeed a privilege, and I am hoping that one day, this rating on my licence will look as impressive as a Harvard or Spitfire… Right!

The Travel Air is a descendant of the Bonanza, and preceded the more common, and popular, Baron. It was originally supposed to be called the ‘Badger’ (going along with the series of names beginning with the letter ‘B’), however, the American military intervened. as around the same time, they were also aspiring to use the name ‘Badger’ on one of their aircraft. The name ‘Travel Air’ seems very unimaginative and as obvious as travel-by-air (duh!), but in fact, the name comes from Travel Air Manufacturing Company, which was the company which preceded Beechcraft. It first took to the skies in 1956, and it did prove to be quite a success with over 700 examples made.

Reading the POH feels a lot like reading a story – it reads lyrically, and takes you back to a golden era in aviation. People dressed up to go and fly, it was assumed the pilot was male, and pictures depict the potential passenger as female. Smoking was seen as a desired social activity, and aircraft features reflected this, with multiple, easily accessible ashtrays, as well as a convenient nook to hang your coat so that it wouldn’t get crumpled – thoughtful indeed. The cabin was obviously a selling point of this aircraft – roomy, with comfortable seats – every benefit of travelling by air!

By modern standards, this light twin is under-powered, but one must remember this is a 1958 model, and, at the time is was seen as out-kicking the competition, in terms of price and performance. Nowadays, more commonly used as a trainer (mostly in the US), one must take heed that it was not designed for high density altitudes, especially up on the South African Highveld! Admittedly, I was concerned about its lack of performance, especially when low to the ground, but it has proved to be a very effective learning tool in thoroughly understanding (not merely assuming) the characteristics of your aircraft, and not ‘pushing the envelope’.

On the ground, taxiing is initially quite a co-ordination challenge between rudders, power and toe-brakes, but once you have the technique it gives you quite a sense of achievement. Take-off seems to take quite a while, and requires a sense of patience – she will take off when ready…nudge…nudge. Once in the cruise, however, she flies beautifully, and with a very pleasing cruise speed of 140mph! Controls at cruise power are surprisingly sensitive, and despite being a very stable and forgiving aircraft, I initially managed to give my poor instructor some pilot-induced nausea due to my over-reactive handling.

Single engine operations are quite a leg strain initially, but if you get through the procedures quickly, she will behave. Although she is a forgiving trainer, it is important to take the right precautions with regards to safety, especially when doing training exercises. Like many other light twins, she is under-powered for our local conditions, so it is recommended to practice potentially dangerous flight manoeuvres with plenty of height. Single engine feathering is part of the training, but can be effectively simulated using throttle, rather than actually feathering the prop for real, as this could be potentially catastrophic close to ground. My only real criticism (which is a common feature of Beechcraft), is the order of the levers – pitch – power – mixture, and that one I really cannot answer!

Overall, this grand old Dame is growing on me…