Why sleeping more will improve your flying 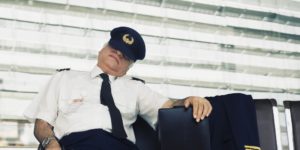 Here is a little something I learnt in my years as an elite level athlete – how much you sleep will determine how well you perform, and this definitely also applies to flying. Many would consider the act of piloting an aircraft largely a mental exercise, but as anyone who has spent some time in that dreaded contraption called the simulator will know, you often evacuate it feeling physically spent. If you look back at your own flying, you will probably remember that your best flights were when you were well-rested and relaxed. This is not a coincidence!

The fact is, that most of us, at some point in our lives, have experienced late nights and early mornings – student pilots in their twenties might have the irresistible urge to party at night, and while they are often well-schooled on the ‘bottle to throttle’ rule, they often don’t consider how the late night will affect the next day’s flying lesson. Similarly, the older private pilot may also be affected by work commitments, or the nightly demands of a young family, all contributing to reduced time spent on planet duvet. The effects of sleep deprivation are real for every pilot, no matter at what stage of training you are at (you will always be learning!).

The long term effects of sleep deprivation are well documented, for example: high blood pressure, weight gain, depression and a wealth of diseases such as diabetes and a generally weakened immune system. However, let me explain why you are unlikely to fly well, or worse, make serious mistakes after that late night:
1. Your brain – will be exhausted the next day, as it did not have enough time to form new pathways in order to remember the new information gained the previous day. As a result, reduced concentration is likely, with delays in signals and reduced co-ordination.

2. Mood – your point of frustration or impatience is reached sooner, meaning you become intolerant to challenges far quicker, and you are more likely to make less rational decisions.

3. Microsleeping – as in the case of long car trips, you might find yourself blinking a lot or closing your eyes for a second longer. The danger of flying an aircraft when this occurs is obvious.

4. Reaction time – when drowsy is comparable to that of being drunk, yes, you read correctly! Your ability to reason and solve problems takes considerably longer.

As you may have figured out, none of these things will make you a good pilot, but will reaching out for that cup of coffee (or 3) solve the situation? It may seem like the caffeine is helping in initially, but it will not override your body’s need to sleep.

So, how much sleep is enough? This depends on person to person, but on average 6 to 8 hours is essential. To figure it out for yourself, look out for signs such as yawning, eye-rubbing, or getting irritated easily – this means you are short on sleep! You can also take a day to allow yourself to sleep until you wake up naturally, this will give you an idea of the number of hours that will allow you to perform at your best.

Finally, if you want to ace your landings, or master that complex approach in the simulator, then make it a habit of getting enough shut-eye, it costs nothing (unlike most things in aviation!) and you will be surprised at how much better you perform! Before you say you love flying, you owe it not only to yourself, but to the art, to present the best form of yourself in the cockpit each time you step inside.