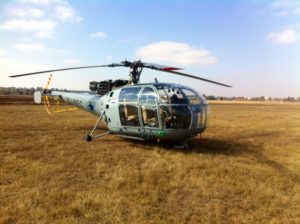 Prior to getting up close with the Alouette, my only contact with rotor blades was having watched episodes of the 1980s TV series Airwolf. I know little about helicopters, except that getting a licence to fly one does not come cheap, and getting the flying skills don’t come easy either. I couldn’t have asked for a better introduction than a ride in the Alouette 3.

The Alouette was developed in 1960 by French engineers at Sud Aviation, and manufactured by Aerospatiale (which would later become Airbus), and primarily marketed for military and rescue purposes. It was a hugely successful product, notably due to its load carrying capabilities and performance at higher altitudes, and sold in excess of 2000 examples.

My primary curiosity was why the owner would purchase a retired South African Air Force helicopter, with no intention of transporting heavy loads (bar perhaps the odd rotund passenger) or injured patients. The truthful answer would be sentiment. In a sensitive era in South Africa, it might be shocking to some that the original paint work, complete with the ‘old’ South African flag emblazoned on the flank remain intact. One might argue that keeping things as original as possible adds value to an asset, but in this case it is much more about preserving history. It may not be a pleasant part of our past, but it cannot be erased. Much like the Spitfire, Messerschmidt, or B17 these aircraft destroyed many lives, but also saved others. We have to admire the minds that designed and made these beautiful machines but also their impact on the human race. It would be very sad to see these aircraft succumbing to the elements on some scrap heap, when we could be admiring the genius minds behind their construction.

This particular Alouette participated in various sorties during the Angolan war, carrying both soldiers and arms for aerial attacks on enemy ground forces. Speaking to some of those who were conscripts in the South African army, who actually flew in the Alouette, the memories were not necessarily joyous, with some carrying body bags of fellow soldiers and friends at their feet. However, the sentiment lies in the brotherhood of these guys – the unity that existed because your life depended on it. The Alouette was the vessel that contained this unity of souls, participating in wars they did not necessarily understand, but were obliged to participate and endure in. Owning one of these helicopters is much like holding onto an era where you would put your life on the line for a brother who was not necessarily your brother.

The most impressive thing about this helicopter, for me, is the huge space inside, with all round views – perfect for recognisance. It has considerable ability to climb quickly, and has in general maximum and cruise speeds of 210km/h and 185km/h respectively, making it a very agile performer in tight situations. The main difference between the Alouette II and Alouette III is is size and carrying capacity. The Alouette III can take seven persons on board with full armaments – nothing short of impressive!

My personal experience? I loved the rotor experience, the ability to fly so close to the ground is hugely different to what you experience in a fixed wing. The sound of the Alouette III is something I will never get out of my head, nor the sensation of traveling with all round views. If you have ever flown in an Alouette, please share your memories in the comments section below, we would love to hear them!