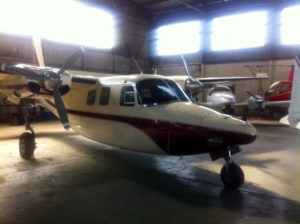 Never call an aircraft ugly, especially when the pilot adores her! I actually have to admit embarrassment at having passed a comment, without taking the time to actually understand the hidden beauty that is the Aero Commander, so here you have it – my apologies Robbert!

A post World War 2 production, the Aero Commander is a light twin, piston-engined and turboprop aircraft originally built by the Aero Design and Engineering Company in the late 1940s. Typically American, she is sturdy, strong and voluminous. Given that the U-4B version was used as a presidential aircraft for US President Eisenhower, it must surely be worth more than a mere glance over… 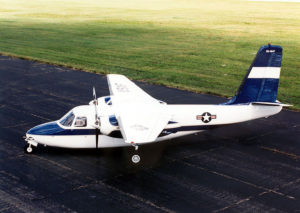 My first impression was ‘Wow, she is really low to the ground!’, which can only mean that there is little room for error on landing. Rightfully so, but if done right, she can happily land on bush strips, and certainly has the strength to handle it. I am told that the hardest part of flying this aircraft is taxiing, and more hours are spent on this, than actually flying her, when you are in training. She is a bitch to taxi simply because it is unlike anything else you have ever taxied. The reason for the challenge, is that she has a hydraulic nose-gear system (in fact there are a lot of hydraulically controlled systems in this aircraft), and involves a technique of curling up your toes, stabilising your ankles and not actually pushing rudder pedals with your feet!

Another important feature is the refuelling system – one fuel port fuels both wing tanks and the crossfeed to the other tank doesn’t accept fuel as fast as the refueller delivers it. This means that the refueller may see the tanks as full when they really aren’t. The key here, is to check the fuel tanks visually, or get a surprise reading on take-off.

Ok, so enough of that. So what makes the Commander a great aeroplane? It has incredible single engine performance! In fact, in order to demonstrate its performance, in 1950 they removed one of the two-bladed propellers, secured it in the aft cabin, and flew from Bethany to Washington, D.C. on one engine. There they met with CAA personnel, then replaced the propeller and returned to Oklahoma in the conventional manner (https://en.wikipedia.org/wiki/Aero_Commander_500_family). Obviously this did not simulate an actual engine failure, but was nevertheless impressive. If this is not enough, simply have a look at the video below of Bob Hoover performing single-engine, and no engine aerobatics in this machine – now that should blow you away!

Essentially, she is beautiful because of what she can do, but practically, she is an incredible work horse that is capable of carrying more than a couple of MacDonalds eaters. Definitely on my bucket list, as soon as I get over my fear of an embarrassing taxi! Check her out at U-Fly Training Academy at Rand Airport if you are ever in the area.