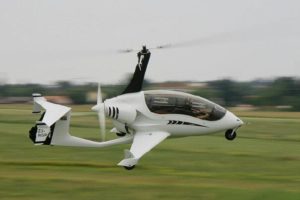 This week we bring you an interesting option if you are thinking of getting into aviation, but costs are a limiting factor. Modern gyrocopters are not only just cool to look at, but really fun to fly and won’t break the bank! We asked the experts at 303 Squadron Gyro training to educate us…

A gyroplane, also known as a gyrocopter or autogyro, is an aircraft that uses rotary blades or a freely turning rotary wing (autorotation) to lift off. An engine-driven propeller gives it its thrust. A gyrocopter flies 160km/h. Highly manoeuvrable, this legendary “flying motorcycle” won’t stall and thanks to autorotation, it makes for a smooth flying experience.

Whereas a helicopter works by forcing the rotor blades through the air, drawing air from above, the autogyro rotor blade generates lift in the same way as a gliders wing by changing the angle of the air as the air moves upwards and backwards relative to the rotor blade. The free-spinning blades turn by autorotation; the rotor blades are angled so that they not only give lift, but the angle of the blades causes the lift to accelerate the blades’ rotation rate, until the rotor turns at a stable speed with the drag and thrust forces in balance.

Because the craft must be moving forward (with respect to the surrounding air) in order to force air through the overhead rotor, autogyros are generally not capable of vertical take-off or landing (unless in a strong headwind).

303 Squadron Flight School was started up by a man with aviation pumping from his heart. In 2000, Mirek Zalewski, a Polish immigrant of 1988, became a partner of the original USTICA flight school in Brakpan-Benoni Airfield. In 2002, he bought the school and to honour the highest scoring air force in the RAF during the Battle of Britain, the patriotic owner renamed the school to 303 Squadron Flight School.

USTICA originally started as a PPL and MPL training base on fixed wing with Cubby’s and CCM aircraft. Then, in 2002 as 303 Squadron Flight School, Mirek introduced gyrocopters into 303. However, long before that, he was already involved in Gyrocopters in SA. He was the first instructor on Gyrocopters in South Africa after having the first modern gyro (VPM – now Magni) imported in 1993. Initially, as most are, he was very sceptical about the gyrocopter before he did his first flight in Italy 1992. He was absolutely impressed with the gyro and his dream began in importing and training gyrocopter flying in South Africa.

Together with the fixed wing, Mirek built up the first official gyrocopter school in South Africa. As his two children, Matthew and Caroline grew older, they too got converted into being pilots in both fixed wing and gyrocopters.

Today, 303 Squadron Flight School still offers training on fixed wing and their speciality, the gyrocopter. The school is run mainly by Matthew and Caroline, who are as passionate as their father. Give it a try!

Thanks to Caroline Zalewski for the words.