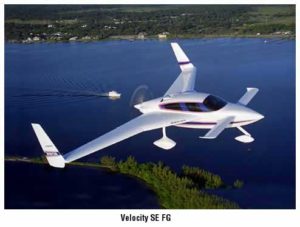 Since participating in the PTAR this past weekend, I suddenly have a need for speed. I have seen this one before, although it was in pieces in a dark corner of a hangar, so it was nice to see one in flight, and getting to chat to the pilot.

The first thing that you see, or actually don’t see is the front prop, because it doesn’t have one! I cannot place it in either the ugly or pretty category, it is just disturbingly unusual. It is a contradiction in various ways, for example it is very, very fast in flight, with a VNE of 200 KIAS, yet has a landing speed of 70 KIAS. Surprisingly, it does not have a listed stall speed, because it cannot really stall because of an interesting design feature called the ‘canard’. I am not sure why it is called a canard (French for duck?!?!), but I can tell you what it is. It is a sort of ‘forewing’ thing ahead of the main wings in aircraft that do not have a traditional tailplane. The Velocity is not the only aircraft to have this aeronautical feature – this little ‘pre-wing’ is aimed at reducing wing loading, and improving the main wing airflow. The result is greater manoeuvrability, especially at high angles of attack. This explains why you cannot really ‘stall’ a Velocity – the canard stalls, but not the main wings, but you will feel the canard drop.

So it doesn’t ‘stall’ and it is super fast but there is a catch – it is a challenge to fly, and calls for precise piloting skills, especially on take-off and landing. It does not take-off quickly, especially in hot and high conditions, requiring a runway of at least 1400m. Lifting the nose too quickly or steeply will land you in trouble. It has a long take-off run, and once it starts to lift you need to immediately keep the nose down in order to build up sufficient speed. As almost every feature on this aircraft produces lift, everything reacts the same way – should there be a gust of wind, theoretically, there is little change in pitch or attitude.

This, however, is not an aircraft for beginners – she is a handful in the initial stages of flight, requiring more than your regular levels of attention, but if you understand her well, she is a great performer.