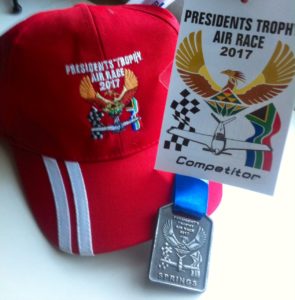 Doing your first President’s Trophy Air Race (PTAR) is a bit like going on a blind date – you know it could be good, but you have no idea what to expect! Sometimes it is best not to ask too many questions, and just go forth…

Having participated in a few rallies (which I thoroughly enjoy), I thought how different could it really be? In my mind it was just a very fast rally, so prior to being put off by the large eyeballs and raised eyebrows at the very mention of PTAR, we decided to enter and educate ourselves thereafter. It is harder than it seems, but less terrifying than I imagined.

Information for first time participants is a little vague, especially if you are like me and need to plan everything beforehand. The organiser Robin Spencer-Scarr bombarded with my questions, just said ‘Enter NOW! You won’t regret it’. So basically all we knew was to have the aircraft at Springs airfield on Thursday and we would get instructions from there. Truthfully, I was anxious at not knowing ‘enough’ beforehand, but after the first briefing all was made clear and we got quite excited. There were many experienced pilots and navigators, and lots of testosterone – alot like the Bear Grylls of aviation, but don’t be intimidated, most are mostly there for a good weekend.

Sooo… How does it work? Well, the first important thing is the handicap. In order for all aircraft to compete equally, everyone is given a handicap speed. In the Sling 4 we were given 123.5kts which I felt was a bit high, but as first time participants and being pretty hopeless at maths, I was not going to argue with the big chiefs. You need to try and maintain this speed throughout the route – the closer you are, the better your chances of winning. Obviously, things like climbing and descending will affect this speed, so you need to carefully consider when and how to execute these manoeuvres. We opted to fly fairly low, at about 1000ft AGL, in the hopes that we would minimise the climbing, have a weaker wind at that level and high enough to spot the turn points.

The next thing is planning the navigation. As GPS is strictly forbidden (and checked), you need to do it the real old-school way, with maps and rulers. Generally these should be straight lines, but it is advisable to steer a little wider around turn points so that you can turn gently, and lose as little speed as possible (recovering speed after a steep turn will cost you!). It should also be noted that you need to pass at 200-600ft, so plan for a slow descent if necessary. We also considered the geography and looked for gaps in the mountains which could be less costly than speed sapping climbs, but you MUST be aware of wind direction and plan for possible up/down drafts. Some teams seem to confidently plan their navs in 5 minutes over a beer, but we took ages! I recommend that both pilot and navigator work together on this, so that everyone is in agreement and clear on the route.

Day 1 was supposed to be the warm-up: an ‘easy’ route Springs – Piet Retief – Wakkerstroom and back. Simple. A start list was issued with each aircraft allocated an engine start time, and take-off time. The ground crew were really great – instructions were clear, and one by one, aircraft lined up behind one another. Never will you have the opportunity of seeing so many aircraft lined up on the runway and taking off 30 seconds apart. Amazing viewed from the ground! In our excitement of finally doing ‘this thing’ we sort of missed the first turn gazebo, and so turned a bit late, resulting in an unusual track to the first turn point. It was exciting passing aircraft and being passed by the faster guys. At turn point one, we made the turn with two other aircraft, which almost made us feel like we were flying in formation. There is not much time to take in the scenery – as pilot you are monitoring speed, altitude and heading, while the navigator is focused on map features, timing and setting headings. The relationship between the two is somewhat special, and I don’t think there is a single crew that wouldn’t make suitable candidates for a CRM course! It was a great feeling coming in for that first landing, and soon all cockpit ‘discussions’ were forgotten. We thought we had done pretty well, until we saw what our GPS logger had recorded! We did better than some who got completely lost, ran out of fuel or simply missed turn points. Aircraft speed is one thing, but precise flying is what will win you the race!

Day 2 and we were determined to do better. The final day is the ‘real’ day, with the slower aircraft taking off first, and the faster ones last. The theory is that everyone will then finish together. With 50 to 100 aircraft arriving over the airfield together, this was sure to make one sweat a little, and I was wondering what the residents of the old age home near the airfield would be thinking….World War 3? Like many others, I was worried about finishing with so many aircraft, but we were briefed in such a manner that I think everyone was clear on the arrival procedure. The other obvious concern were the ‘dragons’ to the west of the airfield – the ORT CTR and those pesky Boeings that could spoil the fun! It becomes very obvious why good navigation is so important…

This day is much more challenging, with aircraft taking off around 15 seconds apart – you have to be ready! We were determined not to make the same errors as the previous day, and up our game by being more precise and communicating better. The route was significantly more complex, and looked like a bow-tie with a crossing point. The first part went south towards Standerton airfield and then a right hand turn towards Villiers, back to Springs and then northwards towards Cullinan, then Kriel and finally back to Springs for the finish. This time we executed a perfect turn out, and established ourselves on track immediately – whew!  We were rapidly caught by some fast aircraft, but the airmanship was fantastic and everyone looked out for the safety of others. There seems to be a rise in tensions just before the turn points, then delight on seeing the orange gazebos, and then some frantic heading changes – exhilarating! We were zooming along perfectly until on the cross leg to Villiers we started getting some compass / EFIS compass confusion with two totally different readings! This cost us dearly. At the time we were supposed to arrive at the turn point, it was nowhere to be seen, and the settlement certainly did not look big enough to be Villiers. Yes, pilot shouts at navigator and navigator has to make a decision very fast! According to the plan everything should have been perfect, yet it isn’t! There is no GPS to turn on, so you have to use common sense. We knew that continuing straight past the leg time would only take us further from where we wanted to be, so we turned onto the next heading and hoped for the best. We were really pissed, thinking that we had somehow missed the Villiers turn point and that we would be disqualified – heart breaking. The emotional roller coaster is real, and anyone doing this race has huge passion, so be warned! Somehow we found ourselves magically over the Villiers turn point (albeit alot of minutes late), and suddenly the ‘discussions’ stopped and spirits were restored – we were still in the race!

As communications are silent between competitors, the key is never to give up as you just don’t know what other teams are doing, and believe me even the best teams are capable of screwing up! We knew we had lost alot of time, and had seen a number of other aircraft passing us, yet we remained committed to doing the best flying we could and finish the race! I am pleased to report that by the time we reached overhead the field, there was no mad rush and we were alone. I tried to count all the aircraft already on the ground, but it was very evident we were probably going to be on the second page of the results. We were obviously delighted at finally being able to attend to the urgent calls of nature, and that we had finished the race safely!

Apart from the excellent organisation by the East Rand Flying Club and SAPFA, there were two people who we initially met at the briefings who were perfect gentlemen and willingly offered advice to us – the first timers with no experience. This crew, for me, was pure class, they told us that it was their second participation, and that they were hoping to do well this time around, after finishing 73rd last year. Well, we could only share in their joy when it was announced that they had won the President’s Trophy! Victor Correia and Derek Bird (Bird Aviation Training) were not necessarily the favourites, but embodied what will win you the race – team work, airmanship and focus on the best flying skills you can produce. Congratulations guys!

We finished in 49th place. Will we do it again? Definitely. Fearing the unknown and challenging your skills will make you a better pilot. 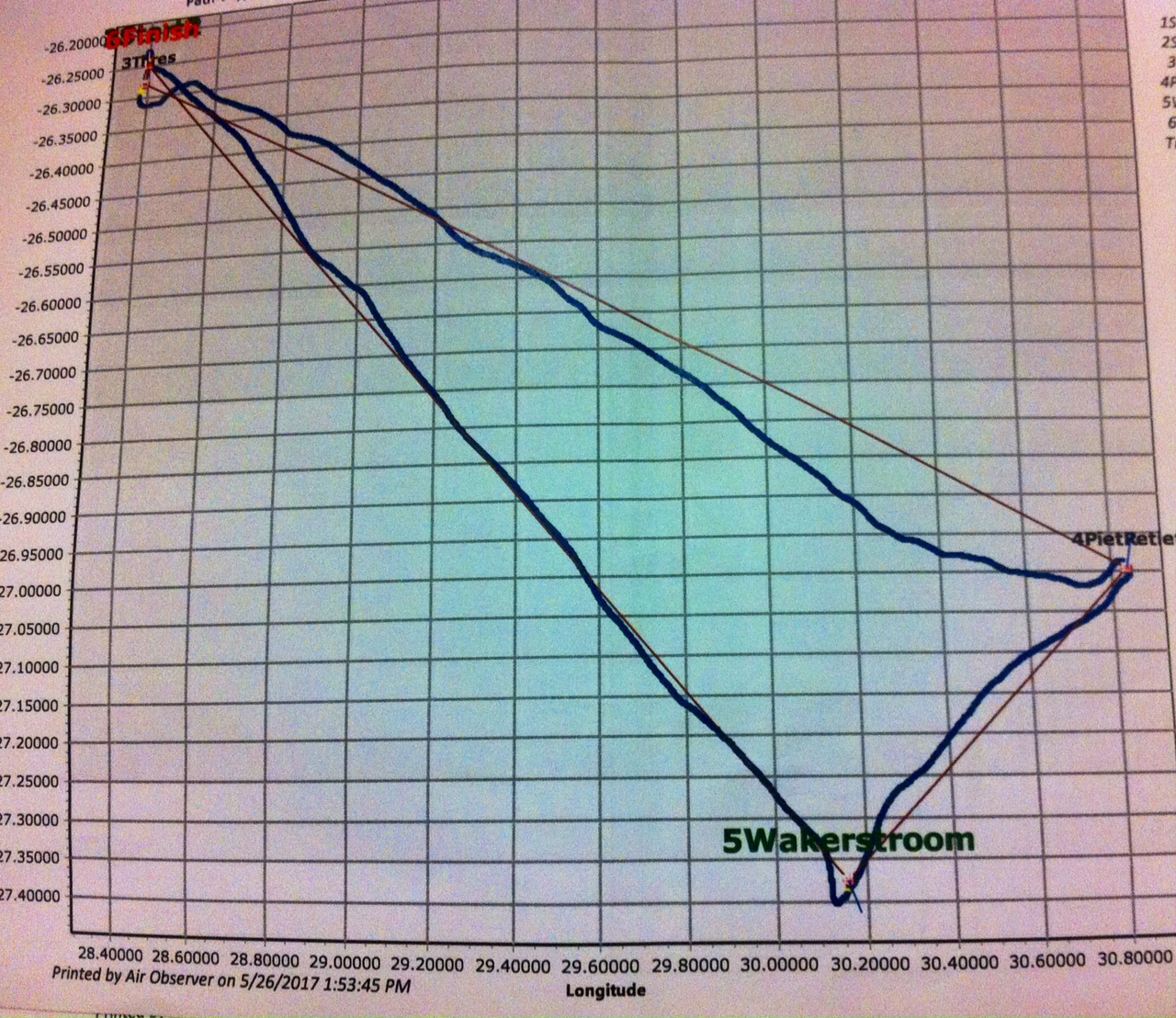 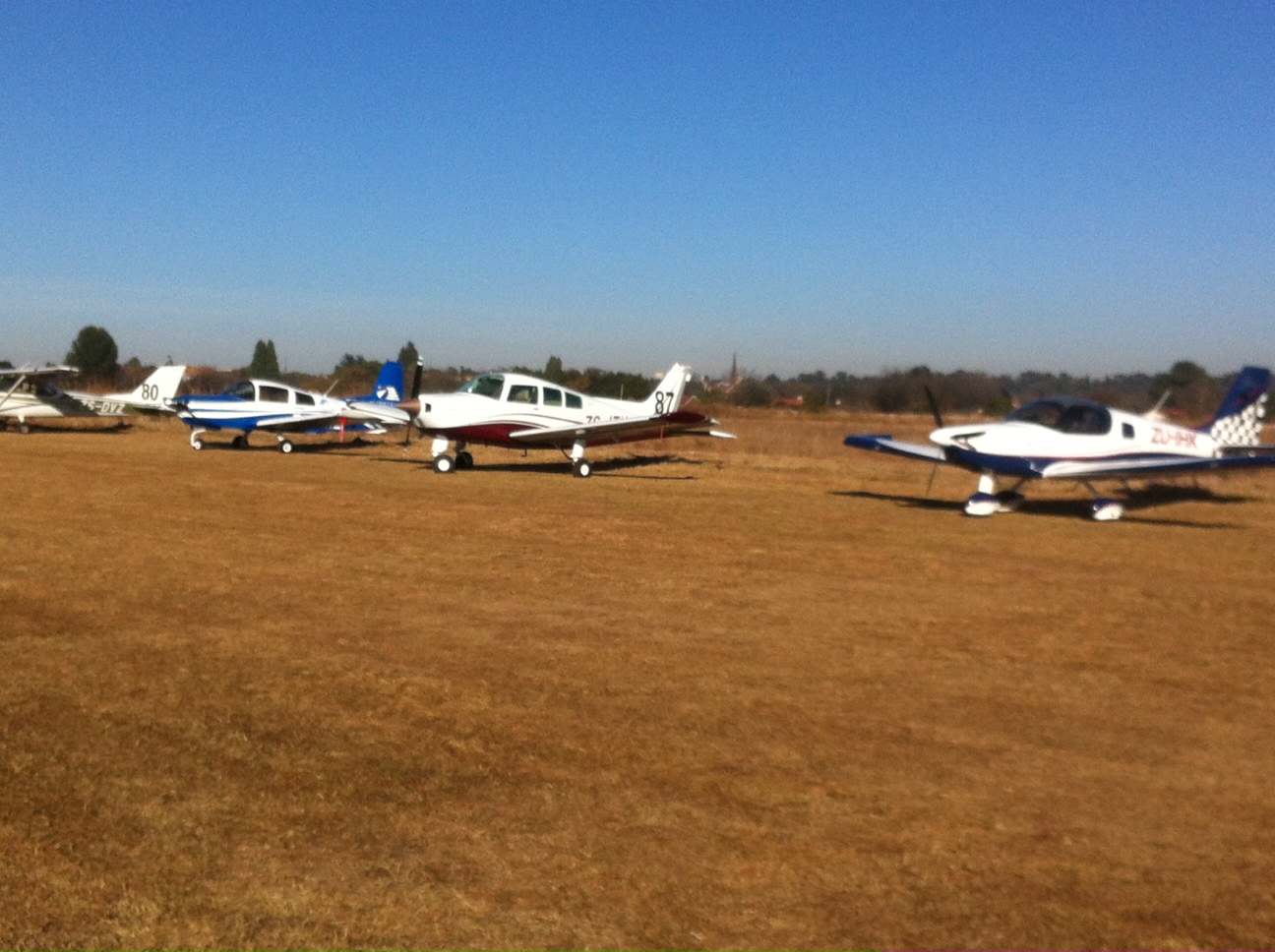 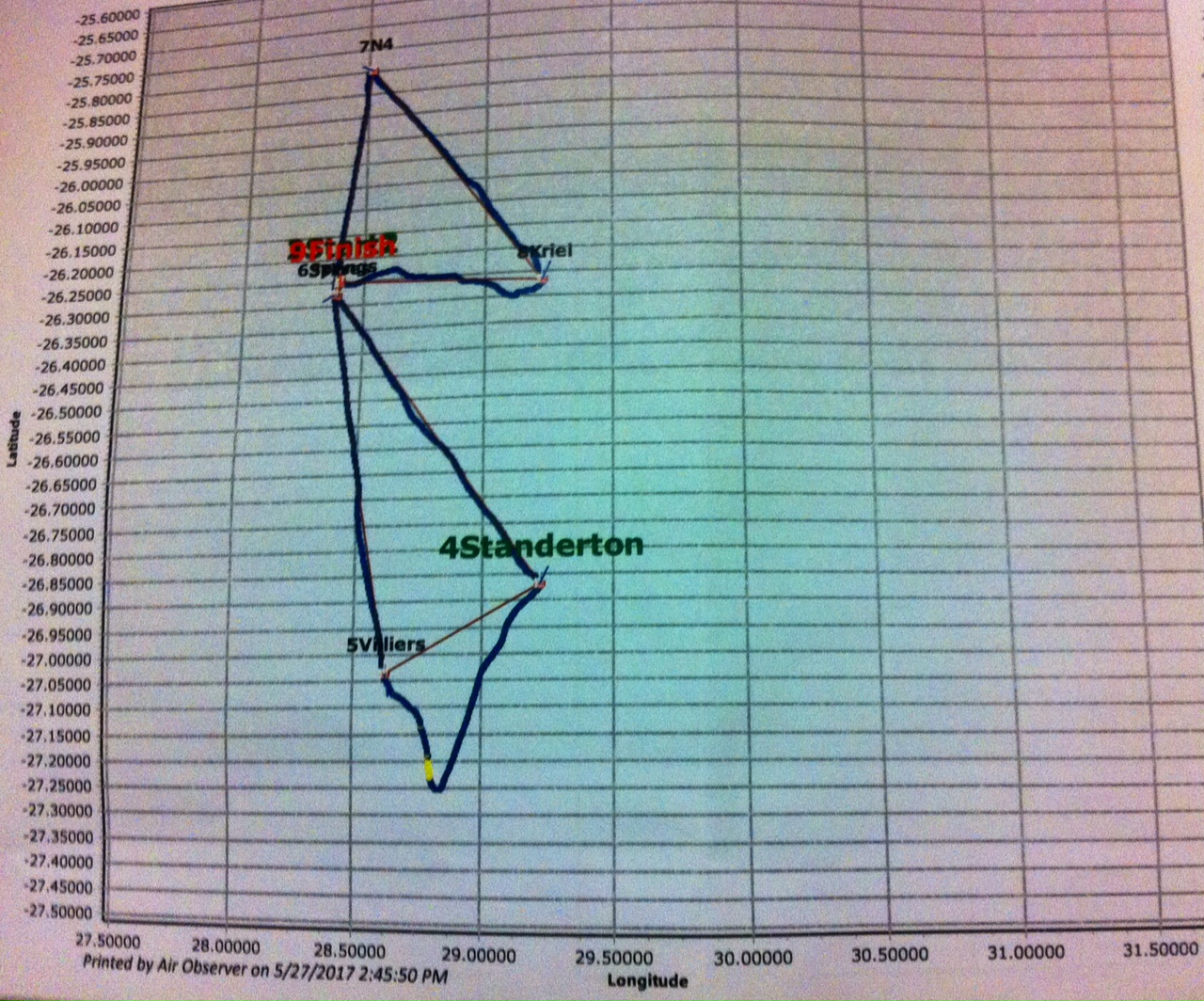 Day 2 – An improvement, then there was the bloops towards Villiers 😀 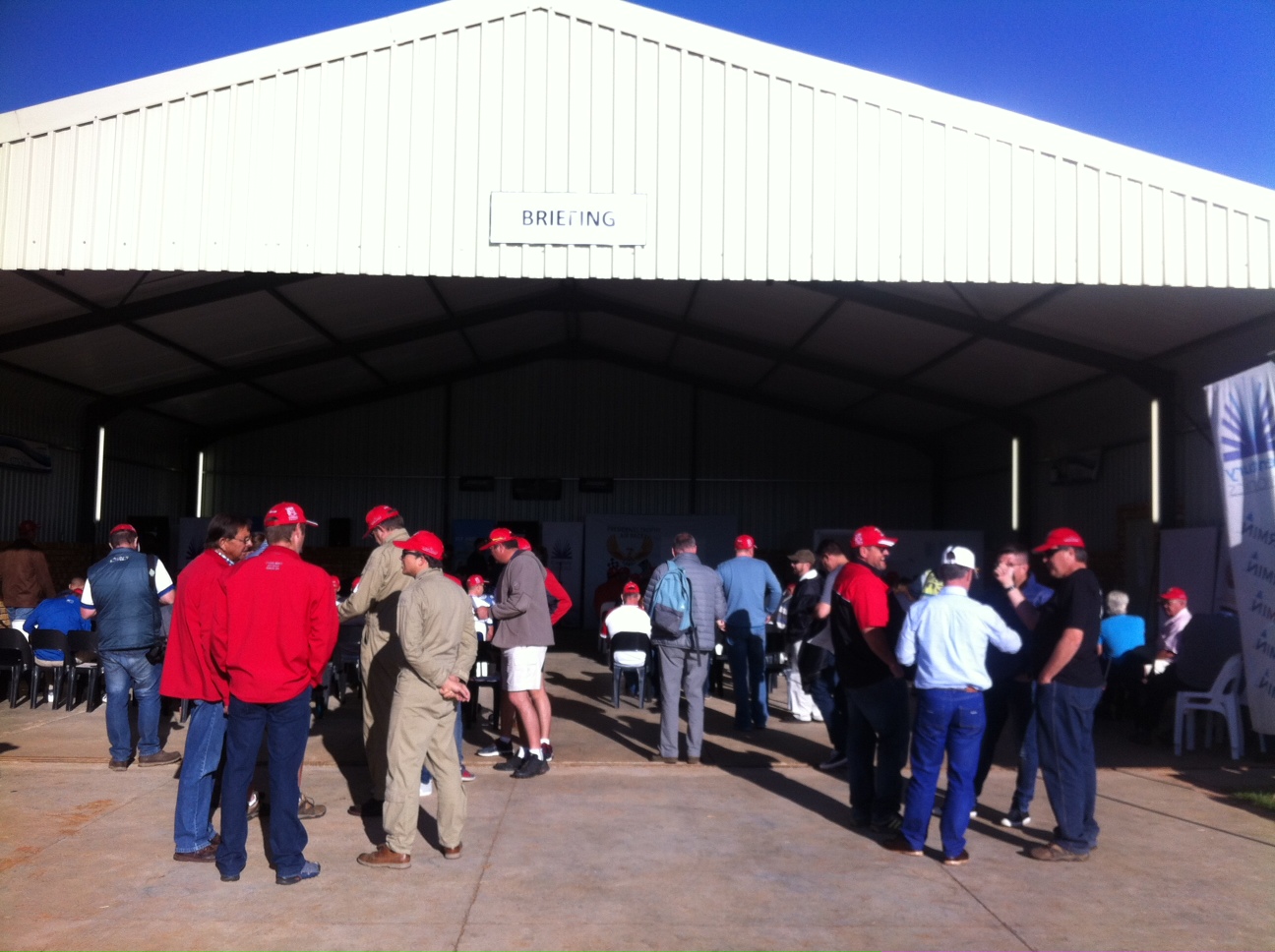 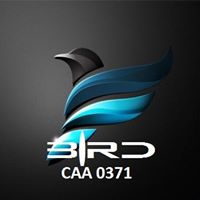