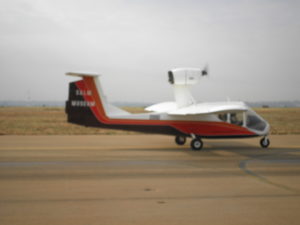 I am sorry to the fans, but I have spent a week trying to find a way to like this aircraft – it is just ugly, and its appearance just makes you want to question how on earth (no pun) it stays in the air? One has to ask, who would design such an aircraft and who would they intend to sell it to?

According to the SAAF Museum website which owns the aircraft, the US company – Thurston Aircraft Corporation came up with the idea for the aircraft based on its amphibian TSC-1 Teal. I am not sure why, as it seems to be a case of a poor movie sequel – only 38 examples of the amphibian were ever built (reference), so hardly a reason to breed variants of something that was never hugely popular?

Well, we do like the contribution that people with weird ideas make towards the advancement of the human race, so it is worthy to note why it was built. My first thought was, what is it? It seems to have some sort of helicopter elements and that is exactly the key – it was intended to have similar low-level ops functions, yet be cheaper to operate. It was never a success as only one was ever built, but it is special and it lives right here in South Africa.

The prop on top of the beam thing (although practical if landing on water), just kill it for me, otherwise it would have been an acceptable looking little aerie… What’s your opinion?