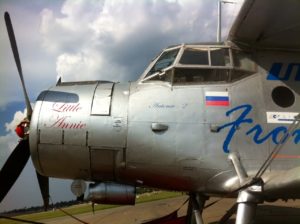 Although I have been flying IN aircraft a lot of my life, I have only been piloting them myself for a few short years, and as a result, almost every new aircraft I see sends me into a personal ground loop.

A few weeks ago I had the privilege of meeting my first Antonov AN-2 – a Soviet beauty (always in the eye of the beholder), not in a hangar, but on the apron at FABB. My partner, who has a penchant for aircraft that I would deem to be leaning a bit on the ‘ugly’ side, immediately fell in love. I, on the other hand, was more impressed by her shear size and intimidation factor. On first inspection she looks very much a high maintenance girl, but as tough as nails, and very much capable of doing the job she was designed for – transporting cargo. I don’t believe the seating in the cabin were ever meant to be plush and cushy, but then again I think the designers were rather a hard-arsed lot who would find the idea of comfort laughable. Equally surprising was the giant ’tissue’ positioned under her nose, to catch all the oil that seems to continuously drip out, but I am assured that this is perfectly healthy and normal.

It is said that the pre-flight on this aircraft takes on average 30-40 minutes, so probably not the plane to use if you can’t stand being out in the cold of Siberia. Interestingly, she is a bit of a performance paradox – takes off quickly but climbs and flies rather slowly. I was really keen to find out what the stall speed is, but according to my Google investigation it seems that there is no stall speed specified in the POH? Rumour has it at around 30 mph, so really super slow, but perhaps someone can confirm this? Unfortunately I never got to see her taxi and take-off, but I was told by witnesses observing the pilots, that the start up is a very physical procedure, requiring some rather animated arm action!

One thing about the Antonov AN-2 that is certain is that she will probably survive longer than one pilot’s entire career years – she was really built to last! Her undeniable ability to take off and land from sub-standard runways makes her a winner for challenging African conditions too. ‘Little Annie’ has a fabulous history which can be found on her own personal website www.littleannie.co.za which forms part of the Just Love Mission. Just what exactly she was doing in Brakpan, I never got to find out, but it was certainly a treat.

If you know more about the Antonov AN-2 / Little Annie, or have even flown one please share your comments!