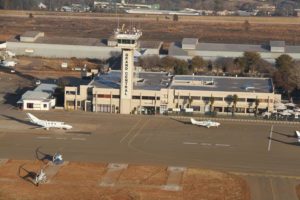 You may be quite surprised to know that South Africa has indeed got five classes of airspace and not four! It may not have been brought to your attention, but indeed, Grand Central Airport in Midrand is the proud owner of South Africa’s only Class D airspace. Not a large area taking into perspective the entire country, but definitely worth knowing what happens there, considering it is in the heart of the greater Johannesburg transport hub.

Controlled airspaces (A, C, D):
A few important things to remember if you are planning to enter these airspaces:-

Class A
No VFR flights allowed – these airspaces are usually very high anyway, so only high performance IFR flights are found here. All aircraft are well co-ordinated with Air Traffic Control (ATC), and separation services.

Class D
So this is the new one in South Africa. Similar to Class C, all aircraft are provided with ATC, but the exception is that only IFR – IFR receive separation. This is especially important for VFR flights who now are responsible for their own separation from VFR AND IFR flights, so be sure to maintain your altitudes precisely! Traffic information is provided as per Class C airspace.

In uncontrolled airspaces, ATC will not instruct you what to do, but if you have radio contact, they are available to provide you with information, so don’t hesitate!

Class G
All aircraft only receive information, so be sure to report your position and intentions accurately.

Airspace infringements will not just land you in ‘hot water’, but are very dangerous, so make sure that you plan your flight properly, especially if you are flying to large centres, using accurate and up-to-date information. If you feel you are a bit disorientated, no matter what the reason, do not hesitate to contact ATC sooner, rather than later – they are there to ensure the safety of all, and have helped many a pilot in a pickle with a smile!