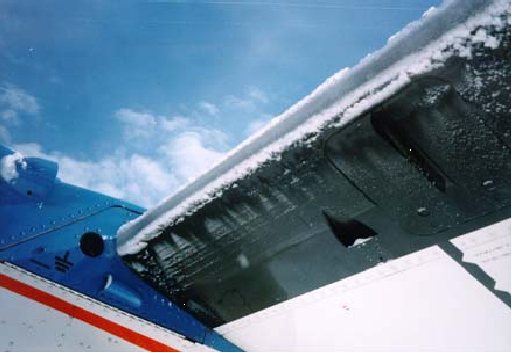 Well, the answer is both ‘yes’ and ‘no’, depending on what aircraft you are flying, the shape of it, and how fast it goes…

Firstly, a few conditions need to exist in order for icing to occur, and the icing process can also be accelerated by factors such as the aerofoil size, and of course, aircraft speed, but we’ll get to those later. The most obvious condition is temperature – freezing requires a temperature of 0°C or less. When it comes to airframe icing, we are dealing with two elements, most notably the aircraft structure, and the surrounding atmosphere. The aircraft surface can have a variety of temperatures, but the most significant, is that of the leading edges, because icing in this area can seriously affect the aerodynamics, and limit the ability of the wings to produce lift, which in essence, keeps you up in the air At the same time we have to consider the temperature of the atmosphere, and the size of the water droplets. High relative humidty is also necessary for icing to occur, and the severity depends on the size of the water droplets. Large water droplets, surprisingly, tend to freeze much sooner (because they are more likely to contain a freezing nuclei, for example, a grain of dust), in the temperature zone of 0°C to -15°C, as opposed to smaller droplets which take a bit longer to freeze in the range of -15°C to -40°C. Sometimes, even though the ambient temperature may be below 0°C, the water droplets do not freeze because there is nothing for them to freeze around, i.e. there is no nuclei such as dust, pollution available. This becomes what is known as a super-cooled water droplet, and with these guys, the bigger they are, the higher our risk of icing.

When the super-cooled water droplets strike the aircraft, only part of the larger droplets freezes instantly, while the remainder flows backwards over the wing and freezes progressively as it moves. This means that extensive layers can build up. Smaller drops generally don’t spread very far on the surface, so cause less severe icing. So now we see that airframe icing is the product of the temperature of the aircraft skin, the atmospheric temperature as well as the type, size and quantity of moisture present.

Now for the interesting bit – the shape and the speed of the aircraft! We talk of the aerofoil shape of the wings when it comes to icing, as this is where the most dramatic, and hazardous effects are experienced. Thicker shaped aerofoil wings (which are more common on light aircraft) provide a larger leading surface for water droplets to strike, which means that they ‘catch’ more potentially ice causing droplets. Thinner wings, such as those found on passenger liners, provide a smaller surface, and therefore, fewer water drops will hit the leading edge.

Much like driving a car in pouring rain, the faster we fly the more water drops strike the aircraft surface for that period of time. So, flying faster can increase the development and accumulation of icing, in the right conditions. However, when airspeeds reach the point where compressibility becomes a factor, around 400kts, combined with high friction, then the temperature of the leading edge (where all this compression and friction are occurring) increases. This heating of the leading edge causes the temperature to rise above freezing at this point, which prevents the super-cooled water droplets from freezing on impact. As a result, at these speeds, the compression of the air molecules against the wing generates enough heat to suspend ice from forming on the leading edges.

In conclusion, high airspeeds are only effective in producing enough kinetic heating to prevent icing on the leading edges, if the speed is sufficient to produce enough compression and friction. In a light aircraft this is all but impossible as most cannot reach speeds of 250kts, nevermind 400kts. Even an aircraft that flies at 400kts will have to precautions when climbing, or more particularly, on a descent into a hold at less than 10 000ft as speef restrictions such as 250kts can prevent the aircraft from flying fast enough for kinetic heating to prevent this type sof icing