Smoking – Worth ending your career before it takes off? 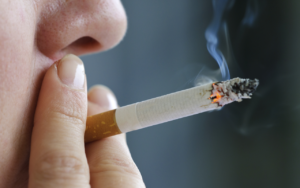 The older generation cannot be blamed for starting to smoke, considering how well it was marketed back in the day, and how many famous war pilots were photographed holding the ‘fag’, which made it a very cool thing to do. What is disturbing, however, is the number of students and young pilots who seem to gather in pods outside at airfields to smoke.

It is disturbing, because, all these years later, and with the knowledge that exists today, about how smoking will affect your health, some members of the young crew still think it is ‘cool’ to smoke. Stress is a ridiculous excuse, as what could be more stressful than fighting in a war where every day you stood a 50/50 chance of returning to base? Already, there is a pilot shortage predicted in the near future, yet many of these new recruits do not seem to have the foresight to see how smoking now could end their careers prematurely. So if you are one of these cool dudes who like to pop outside for a ‘smoke in the sun’, then read on…

The scary thing about smoking, is that initially, you cannot see what it is doing to you viewed from the outside, but the repeated use of tobacco products will slowly kill you from the inside. It is a well-proven fact that smoking is bad for your health – it affects almost every organ in your body. So just in case your mother hasn’t told you, here is what smoking does to your body:

Ok, so if I do sound like your mother, and all of those things do not scare you, then let’s look at how smoking affects your career as a pilot

Smoking in itself will not preclude you from applying for a pilot position, however, recruiters know that smokers are more likely to get sick (here I am referring to the flu and other common bugs, nevermind the other serious stuff), which will require more time off, and generally a mess up of operational schedules. In addition, a smoking pilot typically carries a carbon monoxide blood level of about 5%. This could raise your physiological altitude from sea level to about 7,000 feet. A smoker is much more susceptible to hypoxia and can often feel the effects of hypoxia at lower altitudes.(1) So essentially, at higher altitudes, the focus and decision making processes of a smoking pilot will diminished, and potentially dangerous.

While the damage is certainly already affecting older pilots, what could be worse than spending all that money on training to get your licence, only to fail a lung function test or develop high blood pressure at age thirty? It may all seem amusing now, when a run around the hangar leads to breathless giggles, but ask the pilot who has just lost his medical (and beloved career), about how it feels to join the rest of the population on the ground and never take throttles again…

Smoking is just not sexy. If you want to quit, COLD TURKEY brothers and sisters! If you can keep an aircraft in the air, then surely you have the courage and strength not to light up? I have not yet found a person who quit smoking and regretted it.