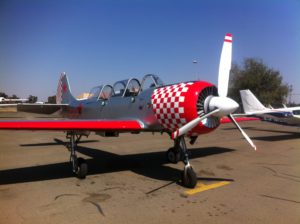 Not uncommon in South African skies, this Russian beauty just happens to be one of my favourites, and flying in one is definitely on my bucket list! It doesn’t carry the war time nostalgia like some of the older fighter trainers, but it stands tall and proud which makes it a simply unforgettable sight.

Apart from her long ‘legs’ I really like the styling of the tandem cockpit, with triangular-shaped canopy, stubby wings and rounded rudder fin. The Yak is aggressive looking, and, younger than it looks, with the first models being manufactured in 1976, and this one in particular is still a relatively new 1982 model. It was primarily used as an aerobatic and combat trainer for the Russian military, until the collapse of the Soviet Union. It is a serious aircraft and not for those seeking a comfortable experience – it can handle all positive and negative G aerobatic manoeuvres, which means the pilot is limited by the G’s before the aircraft is!

Those who own a Yak are clearly in search of adrenaline-packed action. This aircraft does not want to fly straight and level, she just asks to be flung around the sky. That said, this is not an aircraft for beginners as she is not forgiving of bad flying, so if ever you were to get one, going for aerobatic training with an instructor who has experience on the Yak, will definitely improve your skills to match the level of her capabilities.

Speaking of capabilities, she is strong and able to handle almost any manoeuvre, just be warned she will bite if you do not remain on top of things! With an incredible climb rate of at least 1500ft per minute, she will descend just as quickly, so height is definitely your friend. Spins can quickly get out of control as a result, so being fully conscious is definitely a necessity.

The good news about the Yak is that they are still being produced in Romania, so one can still get a new one. Also, like most Russian aircraft, simplicity is the key, which means that maintenance is fairly easy, and less can go wrong. As for me, I am bracing myself for the day I get to fly in one, which will be before breakfast I think…